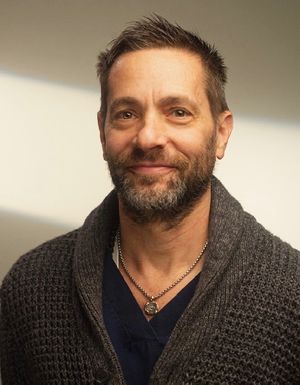 Dr. Steven Woltin has been in practice for over 20 years. He received his doctorate of chiropractic from Life University in Marietta. Dr. Steven says the thing he likes most about being in the chiropractic field is helping patients get better without drugs and surgery. “The other thing that’s really gratifying is being able to talk about health and wellness with so many people,” he says.

A product of Long Island, N.Y., when he’s not spending time with his wife and two daughters, he enjoys playing ice hockey and soccer -- he’s a founding member of Atlanta United Football Club. The family also has a yellow Labrador and a fancy brindle boxer named Maji and Remi, respectively.

Dr. Steven says he fell in love with chiropractic “when I realized that the power that made the body also heals the body.” He also loves the fact that such power is so easily accessible at A Mindful Movement, which provides “quick and easy adjustments for all families."

If you don't see a scheduling time you would like, please call.

Connect with us Today!

Start your journey on the path to wellness and inner peace.